Ever since one of my other angels, my Grandpa Joe, took me to see a police dog show (while I was visiting him and my Grandma Gerrie in California when I was a wee little pain-in-the-ass boy), I've always loved German Shepherds. In 1993, Grandma Gerrie called me and asked if I would like one. Her cousin's shepherds just had puppies and they were looking for good homes for them. That phone call changed my life.
Gypsy (named after the character on one of the best t.v. shows of all time, Mystery Science Theater 3000), became the epitome of Man's Best Friend instantly. She was by my side at every opportunity. She looked at me like with love in her eyes that no words can explain, but a picture can (see above).
Like Mom, there's not enough space on the whole internet to tell you about all the wonderful moments we were blessed to share with her. But some of the best include when she ate a 2x3 foot section of wallpaper from our first kitchen and how she would climb onto the couch to rest, but would WHIP the pillow off the couch 2 feet into the air to get it off of her spot - LITERALLY.
To get a really good idea of what it was like to have her around (and to laugh at some great pictures), please click on over to my FACEBOOK page (www.Facebook.com/DaveTheGuitarPlayer) and click on the "Pics" tab to check out the photo albums and Gypsy's in particular.

Gypsy was born on January 1st, 1993. She always had one semi-annual small thing wrong or another, but never any major medical issues. Hell, for a Shepherd, she never even had the hint of hip dysplasia. By about 10 or 11 years, she was starting to get old, and her kidneys were slowly starting to fail, yet she was still doing very well and was ALWAYS there literally with a smile.
But on October 3rd, 2008, first thing in the morning, she was very weak. Couldn't get up, wouldn't eat her peanut butter (one of her favorites), and wouldn't even drink her water. I knew things were gonna be bad. She, like Mom, just got weaker and weaker.
I've had to let a number of pets 'go' at the vet to spare them any pain and suffering, but I had been praying to God since I got Gypsy as a puppy that I wouldn't have to go through that with her. If I did, I would have to have been put into a mental institution. I am NOT kidding.
I prayed all morning that God would let her go comfortably, here at home, on her favorite blanket, in her total peaceful surroundings, and with her daddy by her side. Around about 11:30am, she started to have that look in her eyes like she was leaving. I told her (through a friggin' SEA of tears) that it was okay, daddy's here, I loved her and I was gonna miss her till the day I die, but that I was the luckiest guy on the face of the earth to have her, and she can go to be at peace and be with my family and all of our pets up in heaven.
In, again like Mom, the most peaceful way anyone could ever hope for, Gypsy passed away, literally in my arms.      Along with the MySpace photo album online, I made up a physical photo album of Gypsy and all the pets that we were lucky to have but that are no longer with us. As much as I ball like a little baby when I think about Gypsy not being here, seeing those pictures, watching old videos, and thinking about the good times, ALWAYS puts a smile on my face at the same time. That, like with Mom, PROVES the existence of an angel. If that person or pet can comfort you in your pain so much so that you smile at the thought of them, then they are truly an angel.
The second angel is my dog, Gypsy. 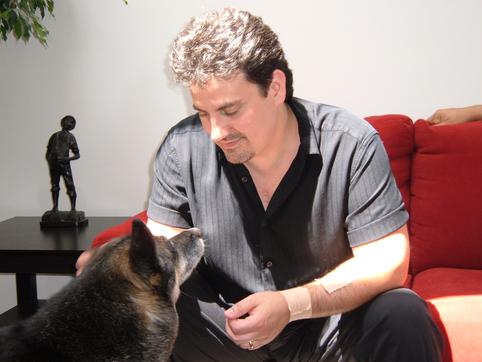 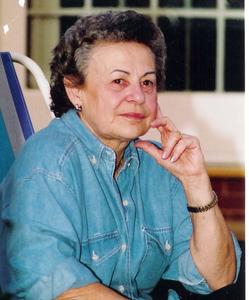 I have two angels that watch over me. Well, I have a number of them (grandfathers, grandmothers, uncles, friends, etc...) but over the past few years I lost two that hit hard. REALLY hard.
The first is my mom, Hazel.
We lost her due to complications brought on by her battle with Leukemia. There's not enough room on the entire internet to write about how wonderful she was, but here are some of the things that her family and friends will always remember. Her smile, her laugh, her love for everyone around her, her AWESOME cooking (full-blown meals, her cookies!!...)  Most of all, I simply remember her being my mom. She was the best. I pray every day that I'll someday make her proud of me.

This next part is heavy on the sad, but it's special at the same time. When Mom went into the hospital the morning of the day we lost her, we were told that she had a sepsis infection and that she would not recover. As we waited there with her, we contacted family. Her heart rate and breathing were slow, but steady. When everyone was finally there and our family friend and priest, Father Joe, began giving Mom her last rites, we held hands, cried (BIG TIME), and prayed. From the time when we started, we noticed her heart beat slowing down. After Father was done, we continued to watch, cry some more, and then as peaceful as one could ever ask for, Mom slipped away.
There is NO question in my mind that her spirit WAITED for us to be there with her so that we could say goodbye. We thanked her for blessing us with her beautiful life, and then let her go. Not from our hearts and mind, but from this temporary place which was made soooo much better by having her in the world.

If you've already checked out the "Promise" page here and know of my charity plans, two charities that I'd like to start up would be charities named after these two angels of mine. I don't know exactly what those charities will do, but I know I'll come up with something that will carry on the memories of these two wonderful angels.